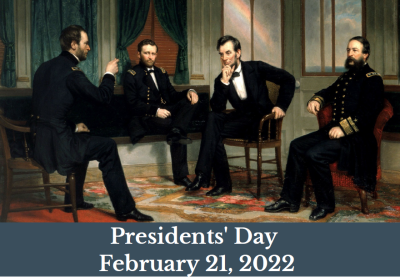 Presidents’ Day, a Federal holiday which is celebrated this year on February 21, was originally established in 1885 to honor the February 22 birthday of first president, George Washington.  Over time it also became associated with the February 12 birthday of 16th President, Abraham Lincoln.  Thanks to the Uniform Monday Holiday Act, which created additional three day weekends for the country’s workers, the holiday will always fall on the third Monday of February but, ironically, never on the actual birthday of an American President. While still associated in the minds of many with Washington and Lincoln, in recent years the holiday has become an occasion to honor the contributions of all those who held the office of President.  Click here for more information on the holiday; and click on the book jackets below for catalog links.

“Nearly all men can stand adversity, but if you want to test a man’s character, give him power.”  Abraham Lincoln

“Posterity — you will never know how much it has cost my generation to preserve your freedom. I hope you will make good use of it.”  John Quincy Adams