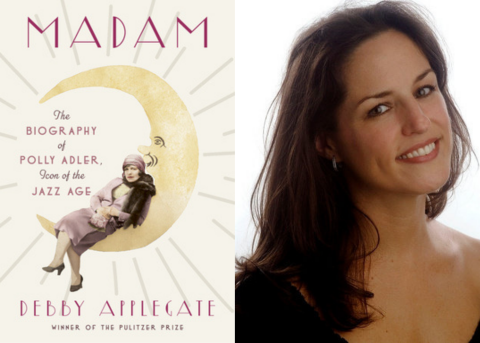 Scarsdale Library is excited to begin our Discover Outstanding Authors series. Join us to discuss their latest works, ask about their process, and to meet other avid readers. Some sessions will be virtual- to provide a wide reach- and some will be in person, for authors closer to Scarsdale.

Signed copies of the books up for discussion will be available for purchase through Bronx River Books and, of course, to borrow in print , ebook, or audiobook via the Cloud or Libby, when available.

Join us for an evening with Pulitzer Prize winning author, Debby Applegate in conversation with Scarsdale Librarian Katie about her book Madam: The Biography of Polly Adler, Icon of the Jazz Age.

In Roaring Twenties New York City, when the nightclubs closed down, the in-crowd didn’t go home.  Everyone went to Polly’s place, the “speakeasy with a harem” run by “The Female Al Capone,” as the newspapers dubbed her. Polly “Pearl” Adler (1900-1962) was a diminutive dynamo whose Manhattan brothels were more than oases of illicit sex, where men paid top-dollar for the company of her girls, they were also swinging salons where the culturati and high society partied with the elite of showbiz, politics and organized crime.  Polly’s pals — luminaries like Joe DiMaggio, Frank Sinatra, Lucky Luciano, Duke Ellington, Dorothy Parker, Bugsy Siegel and Desi Arnaz – made the Jazz Age roar.

No one would’ve guessed that Pearl would become “the First Lady of the Underworld” when she arrived in America as a 13-year old Russian Jewish immigrant. But Polly’s life became a topsy-turvy Horatio Alger tale – a childhood that could be a story by Isaac Bashevis Singer, a wild ghetto adolescence out of a Henry Roth novel, blossoming into a glittering epic of parties and power worthy of F. Scott Fitzgerald.  Then Polly wrote her own ending, penning a memoir that shocked the squares of the 1950s and sold over two million copies.

Applegate immerses the reader in Polly’s world and uses her rip-roaring life to unpack what made this era so corrupt, so glamorous and so transformational, showing how this riotous collision of high and low gave birth to modern American culture.

Debby Applegate is a historian and biographer whose first book, The Most Famous Man in America: The Biography of Henry Ward Beecher, won the Pulitzer Prize for Biography and was a finalist for the Los Angeles Book Prize and the National Book Critics Circle Award for biography, and was named one of the best books of the year by the New York Times Book Review, NPR's Fresh Air, the Washington Post, Seattle Times, Chicago Tribune, San Francisco Chronicle and American Heritage Magazine. Her second book, Madam: The Biography of Polly Adler, Icon of the Jazz Age, was released by Doubleday in November, 2021.  She holds a Ph.D. in American Studies from Yale University and lives in New Haven, Connecticut with her husband, workplace writer Bruce Tulgan.

You can purchase a signed copy of the book from Bronx River Books.

Borrow the ebook or audiobook on the Cloud HERE.

You will receive the Zoom link approximately one hour before the event starts.