Murals and Mosaics of Spanish Harlem 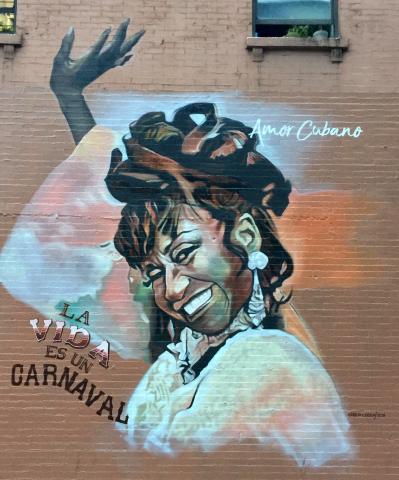 The many colorful murals and mosaics of Spanish Harlem, AKA East Harlem or El Barrio, tell us so much about the history, culture, and politics of this neighborhood and its residents. Some murals and mosaics are dedicated to accomplished citizens, such as the writers Julia de Burgos and Nicholasa Mohr. Others honor world-famous people such as Che Guevara and Celia Cruz. Some of the public art celebrates the Latinx culture or expresses strong political statements. And many of the murals and mosaics include the gorgeous scenery of the tropical islands from which so many members of this community emigrated to New York. A number of the gifted artists who created the artworks received commissions from the City of New York as part of projects to add more public art to the Spanish Harlem community.

Leigh Hallingby is a licensed New York City tour guide who specializes in Harlem, Morningside Heights, and the Upper West Side. She is passionate about exploring all five NYC boroughs and beyond on foot, mostly through organized walking tours. Leigh is retired from a 36-year career as a non-profit librarian. She loves doing research about the neighborhoods in which she gives tours and sharing the information about them with attendees. Leigh is a feminist, collector, genealogist, and lover of arts, culture, and travel. After residing in the suburbs of NYC for many years, she now loves living on the Upper West Side of Manhattan.