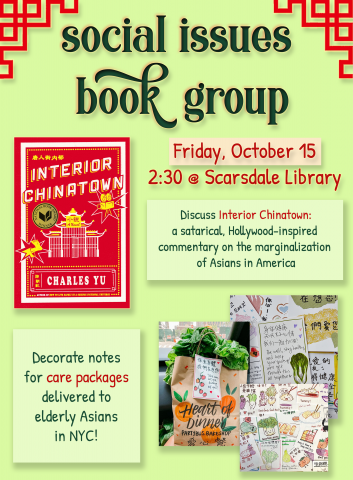 Teens
Registration for this event is no longer open.
Allowed Grades: 6th Grade to 12th Grade

This program is by teens for teens (BTFT)! This is an in-person, indoor, masked-and-distanced program.

Join the Social Issues Book Group to discuss Interior Chinatown by Charles Yu. During the meeting, we’ll speak about the issues that Asian Americans face in the US and illustrate notes for care packages that will be delivered to elderly East Asians in NYC!

Interior Chinatown follows a Taiwanese-American actor Willis Wu, who plays Generic Asian Man on a cop show called “Black and White.” For the past century or so, American movies and television have relegated Asian characters and actors to the margins. Willis’ lifelong wish is to one day become Kung Fu Guy: the ultimate role for an Asian actor. But is this dream just another trap? Written in the form of a Hollywood screenplay, Interior Chinatown digs deep into pop-culture stereotypes of Asian Americans and the endless struggle to assimilate.

The Washington Post calls it: “One of the funniest books of the year… a delicious, ambitious Hollywood satire.”

Request the physical, hardcover book here. Or download it electronically as an eBook or eAudiobook on OverDrive/Libby or cloudLibrary. Or see the Teen Room display to pick up a copy during your next visit.

This program is by teens for teens (BTFT)! This is an in-person, indoor, masked-and-distanced program.