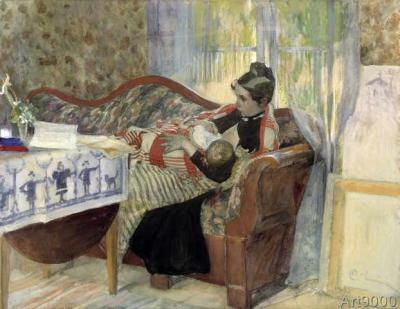 We all know how to celebrate Mother’s Day - with gifts of cards, candy and flowers. But, did you ever wonder why we celebrate Mother’s Day?  Our yearly shout out to Mom is the result of the tireless efforts of a devoted daughter, Anna M. Jarvis, of Taylor County, West Virginia.  Following the 1905 death of her mother, social activist and community organizer Ann Reeves Jarvis, Anna Jarvis held a memorial service on May 10, 1907 at the Andrews Methodist Church in Grafton, West Virginia in tribute to her mother’s activism and to the sacrifices made by mothers everywhere.  Subsequently, Jarvis marshaled a furious letter writing campaign to prominent politicians and  newspapers in support of a national Mother’s Day holiday. Her efforts were not wasted; on May 8, 1914, President Woodrow Wilson signed a proclamation officially designating the second Sunday in May as “Mother’s Day.”  Ironically, years later, Jarvis became so incensed at the commercialization of the day that she spent the remainder of her life (she died in 1948) and her inheritance trying to rescind the holiday she had created.

This year, why not do something different and celebrate mom with a great book? Check out the  titles below; click on a book jacket to be taken to a catalog link.  And, however you chose to celebrate, let us acknowledge moms everywhere by reflecting on the enduring value of family, in good times and bad.